This is going to be more like a case study then a how-to, please don’t expect to find a finished program.

Al lot has been written about the sense and nonsense of Real Time Operating Systems.
Internet is filled with aguments about why and when you should use a RTOS and there is of cource the eternal debate of commercial, open source or roll-your-own.
All of which I’m not going to repeat.

Why roll-my-own? There is nothing more insightful then to roll-your-own, so that’s what I did.
I used the core of a RTOS as my starting point, the scheduler.

A pre-emptive prioritised and co-operative scheduler

The target is to design a prioritised-cooperative-preemptive scheduler. Well nothing fancy, each task has a priority and I want each task to give up control when it is finished, so it doesn’t waist time doing nothing during its time slice. I design alot for battery powered systems so the basic idea is to use a context switch algorithm that races to the idle task where I put the system in sleep mode.

Basic flow of a RTOS

The switch alogorithm will look like this, priority level is indicated by the position in the array of tasks:

If no task needs service we will end-up in the idle task (0).

Now for the interesting part.

I am not going to explain the registers in the cortex-m series processor instead I’ll point to the Procedure Call Standard for the ARM Architecture [6] and repeat Table 2, Core registers and AAPCS usage. 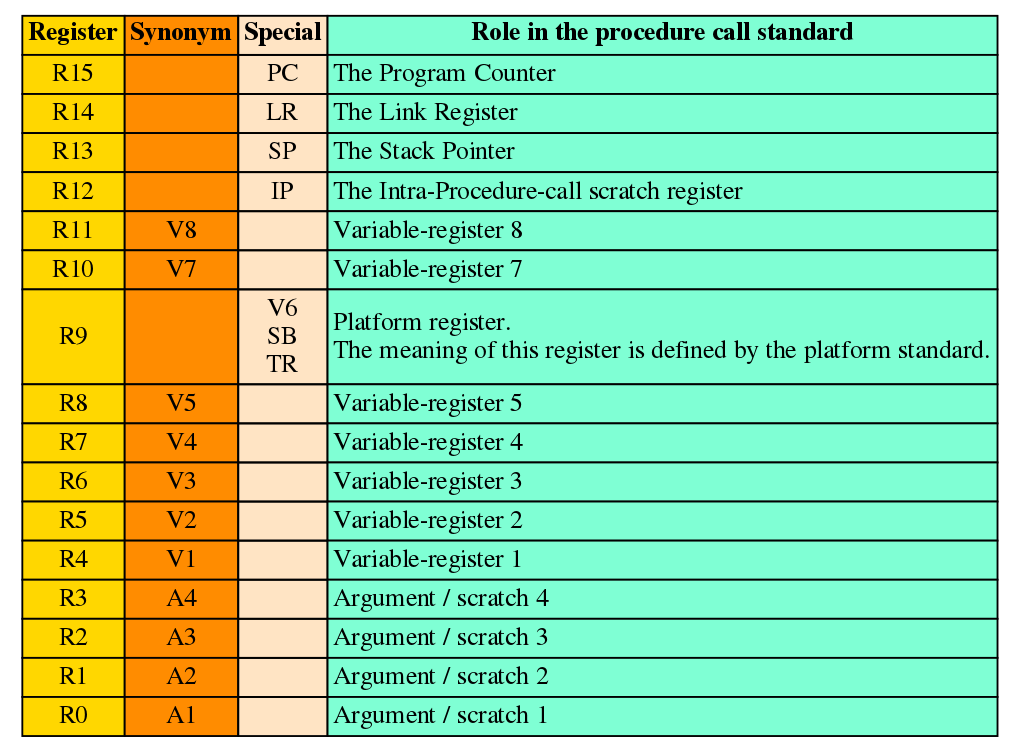 For more information please look at a white paper by ARM (Cortex-M for Beginners) [3], look for paragraph 3.1 Programmer’s model, or take a look at NXP UM10360 document [4] paragraph 34.3.1.3 Core registers.

The cortex-M family hardware does store a lot on its own [2] however we need to store the remaining registers.

The hardware uses the Decrement address Before access strategy.

After the interrupt (in my configuration the PendSV interrupt) the hardware stores the main registers onto the task stack, then we enter into the interrupt handler where we need to store the remaining registers. After that we are ready to do the context swich.

In my scheduler I would like to use this dual stack pointer. That means that the tasks are using the process stack (PSP) and if we enter the PendSV interrupt, R13 is pointing towards the main stack (MSP). So first ting to do is to make sure we push the remaining registers to the PSP location.

Asume we have two task stacks:

During initialization we setup the stack of each task:

It’s +128 because the cortex-M family uses a decending stack configuration, so we set it to the top of the stack.
-16 (== 64 bytes) because at the context switch we pop 64 bytes (32 by software and 32 by hardware) from this stack to start the next task. So at the end of the context switch function, the PC register is loaded with the address of the task_function and the program will continue from there.

Because we start the first task manualy we can disgard the previous filled values of xPSR, PC and LR for this perticular task. The carefull reader may notice that we set the stack pointer to a memory position outside the boundaries of the task1_stack array. As mentions before the hardware uses the Decrement address Before access strategy. So it will decrement the memory position before it wirtes anything on the stack.
The stack is setup we can call the task1 function. When entering this function the hardware will push registers on the stack that will remain there forever.

Most of the PendSV code is strait forward except maybe the last two instructions.

Accoording to [5] an exception return occurs when the processor is in Handler mode and executes one of the following instructions to load the EXC_RETURN value into the PC:

We use the third option and load r0 with the “Return to Thread mode, exception return uses non-floating-point state from the PSP and execution uses PSP after return” value.

Below is an attempt to visualise the start and switch sequence.

This is the basics of a RTOS, the scheduler.